The Bills’ failed field goal before halftime of the Monday Night Football game is a play that seems destined to live a long, bizarre life. And it has little to do with the misapplication of not one but two rules on the play.

Seahawks CB Richard Sherman has been villainized for his block of the kick in which he also knocked down the kicker, which to some looked like an intent to harm. Those observers include the wife of Bills kicker Dan Carpenter.

Kaela Carpenter took issue with the hit in a tweet Monday that advocated castration for Sherman’s action, complete with an image of the appropriate tool: 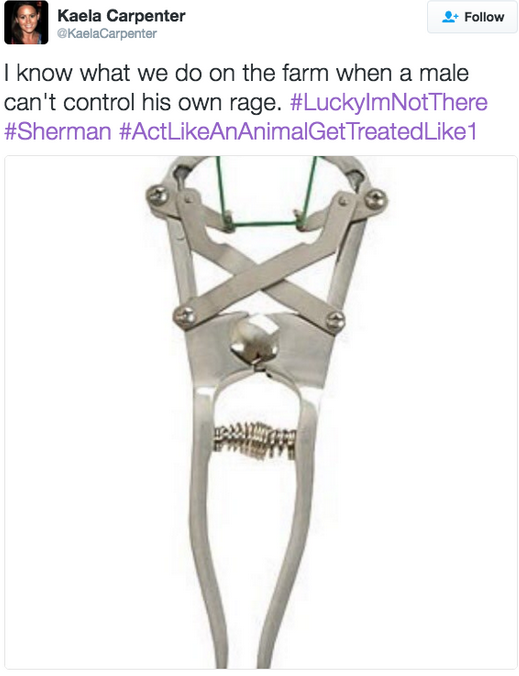 She later tweeted out an explainer that fell short of an apology, expressing bewilderment that it could be seen as racist:

Sherman responded in a tweet with a sarcastic, “Thank you. Have a great day!”

At his Wednesday podium appearance at team headquarters, he was again dismissive, but also drew a reference to the growing trend of racial intolerance that was part of the conversation in the presidential election.

“It’s not surprising at all,” he said. “This is a day and age, you’ve got the Ku Klux Klan running around. People say whatever they want, and there’s very little consequence. For her to say something like that and then have a BS apology like she did, it’s just the way of the world. I don’t let it bother me. It’s something I’m very used to. It’s just the way people are, the way people were raised.”

Sherman was asked how he felt.

“It’s more disappointing than anything,” he said. “It’s also something that’s understandable. Ignorance has always been in the world. The core of this country has been built off slavery, people owning people. So anytime you understand that’s the core principles of the way a nation was built, then you have to some kind of, I guess, sympathy for it.”

“It was going to be a big transition whoever won, so it’s a big challenge for the country, challenge to draw together and do the right thing moving forward,” he said. “We’ve been staying abreast of it all along, so everything moved smoothly today.”

Even though Carpenter was down long enough to get trainers to tend him, he recovered  to kick a 49-yard field goal that was disallowed because of a delay of game penalty, which referee Walt Anderson later admitted was a mistake. Seahawks coach Pete Carroll said Tuesday Carpenter decided to “ham up” his injury. He then missed from 54 yards.

Post-game, Bills coach Rex Ryan accused Sherman, during a sideline encounter, of “mean-mugging” him, and said he told Sherman he was too good of a player to “act like an ass.” Carroll Tuesday responded to Ryan’s criticism by saying, “I just wish he’d coach his own team.”

When told of Carroll’s remark, Ryan said on a conference call Tuesday, “As a matter of fact I do coach my own guys and I’m proud of the team that I coach. We haven’t had the results that we shoot for every time, but I’m proud of this group and yeah, I have no problem.

With the Seahawks, never is there a shortage of stories.