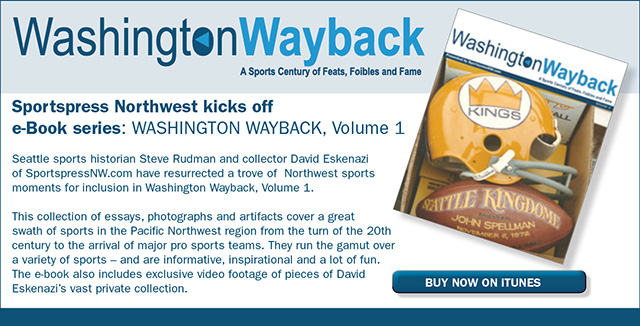 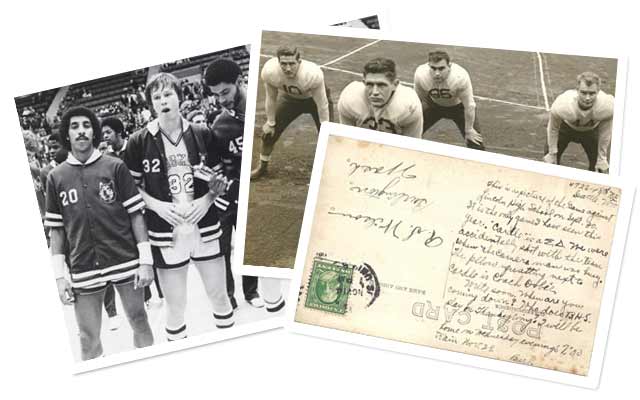 Sportspress Northwest is pleased to announce the release of the first in a series of exclusive e-books featuring content from its Washington Wayback collection, authored and illustrated by Seattle sports historian David Eskenazi and Steve Rudman, co-founder of Sportspressnw.com. Published weekly since the web site’s launch in late 2010, Washington Wayback is dedicated to preserving the region’s rich and diverse sporting legacy.

Washington Wayback Volume 1 is now available for download on iPads with iBooks or via computer with iTunes (https://itunes.apple.com/us/book/washington-wayback/id703308520?ls=1).

Washington Wayback is an entertaining and educational retrospective on the athletes, coaches, teams and events that have shaped the region’s dynamic sports history. Volume 1 explores the 1918 world-wide influenza pandemic and 1929 stock market crash, illustrating how those events changed the course of Seattle sports history. It tells the odd story of how the ill-fated Seattle Kings – and not the Seahawks – almost became the city’s National Football League franchise.

Volume 1 introduces, and re-introduces, many Seattle many sporting icons who have been out of the headlines for decades but are worthy of consideration today, including turn-of-the-20th century football genius Gloomy Gil Dobie, Hockey Hall of Famer Frank Foyston of the Seattle Metropolitans, and former Seattle Rainiers legends Kewpie Barrett, Jo Jo White and Edo Vanni, who captivated the city in the 1930s and 1940s.

Fans will learn about teams that once were – Seattle Bombers, Seattle Athletics, Seattle Steelheads – but no longer are, and be able to revisit some of the major sporting spectacles in the city’s history before the arrival of major professional sports, including the Freddie Steele-Al Hostak world middleweight title fight in 1938, Seattle University’s shocking upset of the Harlem Globetrotters in 1952, and the University of Washington’s remarkable run to the 1953 Final Four.

In addition to the historical content, not available anywhere else, each Washington Wayback e-book will showcase rare and never-before-seen photographs, images and ephemera from Mr. Eskenazi’s vast collection.

Washington Wayback, Volume 1, will stir the memories of seasoned readers and enlighten younger ones to the vast scope of local sport that existed before the digital age. Not only is it a must-have for serious and curious fans, it is a treasure for researchers and historians as well.

Eskenazi, who inherited the “collecting bug” from his grandfather, is a Seattle native who has a vast collection of photographs, images and ephemera that cover the gamut of Seattle sports history. He is a graduate of Franklin High School and attended the University of Washington.

Rudman worked as a columnist and editor at the Seattle Post-Intelligencer before its demise in 2009. He also served as Director of Research at ESPN.

Eskenazi and Rudman developed Washington Wayback from The Wayback Machine, a feature published weekly by Sportspress Northwest since 2010. 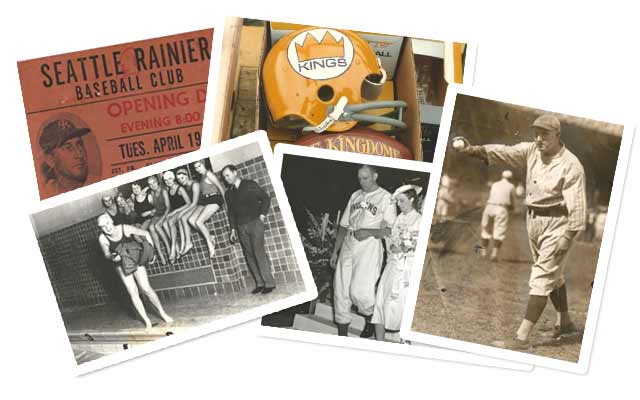 Good writing and clear thinking have never gone out of style. Sports grow more popular, technology makes e-publishing cheaper and faster, and Seattle is the place where innovation and private capital come together to flourish.

As the business of journalism continues to implode, the market for sports in the region continues to explode.  Sportspress Northwest is poised in the middle, ready to exploit both trends.

Quality sports content is the draw, e-commerce is the engine, and digital delivery is the road forward. The national puzzle of monetizing local/regional news has a solution in Seattle’s journalism and technology talent, in an under-served market crippled by legacy media’s debts, dated approaches and failure to recognize that they are all Internet companies.

Washington Wayback, Volume 1 is available for download on iPads with iBooks or via computer with iTunes, under the category: Sports & Outdoors. The book can be viewed only using iBooks 3.0 or later, on an iPad. iOS 5.1 or later is required.

What they say about Washington Wayback

“Washington Wayback continues to be a regular highlight for me and, I’m sure, everyone else with any interest in the sporting chronicles from ‘Dad Yesler’s Li’l Ol’ Sawmill Town.’What you’ve accomplished, from my point of view, is epic in scope” – J Michael Kenyon, former Seattle Post-Intelligencer columnist and reporter

“This writing, week-in-week-out, is so far above, in substance, anything being put out locally, and perhaps even nationally, that it really should be receiving, or at least be nominated, for various journalistic awards” – Michael Kaiser, on The Dewey Soriano Story, Part II

“I love the Wayback articles. Finding out what was going on behind the scenes during days of yore is truly fascinating” — Doug, on Dewey Soriano Story, Part II

“Wayback is one of the best sports series I’ve ever seen” – Pixdawg13 on Houbregs vs. O’Brien Twins

“I would say that the Wayback articles are among the best features on sports history to be found on the Internet or anyplace else. Keep ’em coming. Thanks – OomPaul, on Pint-Sized Eddie Taylor

“Tuesday is one of my favorite days of the week, because I know I’ll get to read the latest edition of the Wayback. Great stuff, David” – Morris, on Mad Russian Lou Novikoff

“I very much appreciate the article on my father. He has always been my hero but then I am biased. I look forward to many more of your articles” —  Dave Harshman, on Marv Harshman’s Athletic Life

“As a sports historian/columnist/author in the Vancouver, B.C., area, I have found the stories — and in particular the extensive research and vintage photographs — in Wayback of the highest quality” – Len Corben, on Hockey Icon Pete Muldoon