Thiel: No Lynch, no line, no Seahawks menace

The Seahawks had an unplanned team meeting Wednesday that dealt in part with CB Richard Sherman’s criticism of play-calling in the Dec. 15 game against the Rams, coach Pete Carroll disclosed Monday. He didn’t say what was said, but did say the rare confab also included a message about helping younger players prepare for the playoffs.

A guess here is that he didn’t address the two developments from last winter that are the driving forces behind two losses in the past three games that is so unlike the Seahawks’ modus operandi in previous Decembers.

The first is the failure to develop an adequate plan for the retirement of Marshawn Lynch, and the second is the failure in free agency to find adequate help for the offensive line.

The two episodes are far more impactful on the deteriorating season than Sherman’s oral transgressions with coaches and local media. While deserving of a reprimand, Sherman had nothing to do with what will be the most awkward individual stat of the 2016 season:

RB Christine Michael likely will lead the Seahawks in rushing with 469 yards. And he plays for the Green Bay Packers, who could end up as the Seahawks’ foe in the first round of the playoffs.

All together now: Gah.

As of Monday night, however, Detroit lost to Dallas 42-21 to fall to sixth in the NFC’s current seedings. The Seahawks now are No. 3 and would host the Lions. The Packers at No. 4 would host the fifth-seeded Giants. But all have games Sunday that could scramble the seeds after Week  16. (NFC playoff seeds below)

The only way the Seahawks advance to the coveted No. 2 seed and its coveted bye is if they beat San Francisco and No. 2 seed Atlanta loses to New Orleans.

Regarding how the Seahawks arrived here, the two offseason failures, combined with bad health luck, have left the Seahawks as the weeniest they have been since playoffs became part of the winter festival here five years ago. I say weeniest because they ran for 78 yards against Arizona in 27 tries in a 34-31 loss Sunday, and 72 yards in 30 tries Dec. 15 against Los Angeles in a 24-3 triumph.

The latter total included 26 yards on a fake punt that nearly turned into a suicide mission by Jon Ryan. But it was the only rushing play beyond 16 yards in the past three games. Lynch would get 16 yards walking away from Carroll on the sidelines.

The problems with the offensive line have been documented since roster formation began after J.R. Sweezy dashed for cash at the beginning of free agency. But a milestone little noted was reached Sunday: Placing RT Bradley Sowell on the healthy inactive list before the game meant that the Seahawks were without the only free agent linemen they signed in March.

The other one, J’Marcus Webb, was cut Nov. 22 after never showing he was even a subpar NFL lineman.

The Seahawks, and every team, whiff on free agent signings every year (Sweezy didn’t play a down this season after back surgery following his $32 million signing). But when a team is as top-heavy in salaries as the successful Seahawks, whiffing twice in the same positional unit is bound to leave a mark.

It did, on QB Russell Wilson’s knee and ankle, the result of poor pass protection that has lasted through Sunday, when he was sacked five times in the first half and hit 14 times in the game.

That certainly wasn’t the fault of Sowell and Webb, as they likely would be eager to point out.

The five guys who were out there — two rookies (George Fant and Germain Ifedi, second-year Mark Glowinski, and third-year guys Justin Britt and Garry Gilliam) were overwhelmed in the first half, replete with communication mistakes and poor technique.

“I didn’t like the way we matched up with them up front,” Carroll said. “That’s (an absence of) growth and maturity. I don’t have any doubt we’re capable. Be precise and calm and play like we’re capable.”

His point was made in the second half, when the same guys against the same defense produced 297 yards of offense and 28 points.

“The main thing that we take away is that we did in the second half,” he said. “We were in sync, sharp, productive and physical. That was the biggest thing that jumped out.

“The numbers in the second half of the last two games, we put up 480 yards and 42 points. In the first halves of those games we put up 13 points and 200 yards. It’s pretty clear that we got to have something that we can latch on to. We need to get it cleaned up.”

How that happens is up to line coach Tom Cable. But even after the New Year’s Day game against San Francisco (2-13), almost nothing more can be learned about their learning curve. The 49ers have the league’s worst run defense, averaging 4.9 yards per play. Even a 41-3 win with 200 rushing yards is a false positive, given the frailty of the foe.

What is known is that the Seahawks are one of several good, flawed teams that will muck about in NFC playoffs — all but Dallas have at least five losses.

But absent from the Seahawks will be the menace and ferocity of Lynch that so distinguished previous Seattle playoff teams. And it wasn’t just the the on-field production. Even as the anti-authority Lynch irked his coaches, he was a locker room hero to his teammates for that and a host of other psychological virtues.

Granted, his absence has been known since he hung up his cleats in a tweet during the Super Bowl. But the Seahawks drafted three rookies and re-signed once-scorned vet Michael in the hope that the collective could be at least league average. Instead, they are 22nd, at 100.3 yards per game. Last year they were third at 141.8.

Most embarrassingly against the Cards Sunday, they were 0-7 in first-and-goal from the one.

Depending on how the seeds fall in the final games next weekend, it could be Seahawks-Packers. 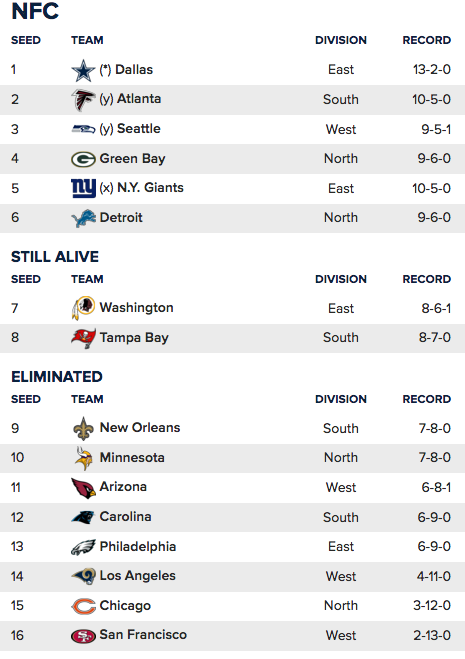