In a somewhat intriguing behind-the-scenes look into an old barn we thought we knew, one thing stood out Wednesday from all the HVAC pipes, stored Zambonis and old locker rooms from the days of Wilt Chamberlain and Zelmo Beaty at KeyArena: Mayor Ed Murray really, really wants the former home of the Sonics to be the new home of the Sonics.

He wasn’t there to say so, nor did any of the numerous city staffers on hand indicate such a sentiment was upon his lips. But as a gaggle of media members invited to peer into the notion of remodeling the 54-year-old building began to dissipate, a developer with a long history in sports and other Seattle buildings shook his head.

“I probably have been through a hundred walk-throughs of buildings,” he said, smiling, “but I’ve never seen this much media coverage.”

Reasons are several for that:

So it is incumbent upon Murray to be as transparent as a good therapy session. He is upon a potentially controversial choice to forgo a privately funded arena in Sodo five years in the making, and choose a privately funded remodel over the next five or so years in one of Seattle’s most densely populated neighborhoods.

Murray’s risk is made more worth taking because not one but two private developers are responding to the city’s recent request for proposals to redevelop the Key into a premier arena that can handle more and bigger concerts and events, and also accommodate the NBA and NHL.

The competing groups with national and global arena-building credentials, AEG and Oak View Group, had representatives on the media tour, mostly for appearance’s sake since designers, architects and engineers long have been at work to try to meet the mid-April deadline for submission of proposals. The city will review the proposals and choose a winner by June 30.

Or the city could choose neither, because it’s possible that both firms could say nah.

That’s what Chris Hansen hopes. He wants a chance to re-submit his Sodo proposal to the City Council absent his previous request for a loan of up to $200 million from the city and King County. But since the project is still in the same location opposite the Port of Seattle’s doorstep, port supporter Murray is hoping to avoid further argument by letting Hansen’s five-year memorandum of understanding expire on schedule Dec. 1.

But before that, “we’re trying to get an understanding of what the possibilities are” at the Key, said Brian Surratt, director of the city’s office of economic development.

One of the best arguments in favor of the Key redevelopment is that the would-be developers propose to create a top-flight building without first getting a big-time pro sports anchor tenant that Hansen seeks. That unhooks the city from the whims of the capricious pro-sports monopolists and their gauzy expansion/relocation plans.

One of the best arguments against the Key redevelopment is that the lower Queen Anne and South Lake Union neighborhoods, sites of explosive growth in the eight years since the Sonics left, will be choked by a potential 82 to 100 sold-out NBA/NHL events a year, plus other bookings. As is, the Key in 2016 hosted a record 25 concerts, six more than in 2015.

Event dates are critical, because if a private investor is going to take all the risk in funding a remodel of a minimum of $500 million and likely much more, the building needs many rentals, many sponsorships and many high-priced tickets to cover the annual construction debt. As one of those involved in the bidding said, “My boss keeps reminding me about this: His kids gotta eat.”

But traffic, parking and scaling the house were not in discussion Wednesday.

The tour was about the physical possibilities of the Key. The RFP bidders must make proposals for two outcomes. The mandatory one maintains the current roofline that would retain the giant concrete buttresses on each of the building’s four sides. The optional one: A complete tear-down.

To anyone without a degree in engineering or architecture, it is impossible to know from a walk-through what can be done within the 385,000 square feet under the roof, which when it last served the Sonics was by far the smallest building in the NBA.

But in more than two hours of exploring the back of the house, as well as the tunnels, grottoes, warrens and out-buildings, one impression was strong: The space dedicated to  redevelopment has a significant amount of unused or under-utilized space.

As the accompanying city-supplied map shows, areas on the east and south of the arena have spaces dedicated to buildings that were built at different times for different purposes, offering little coherence. If they are either removed or re-purposed as part of a greater plan that has more efficiency, including the addition of a second loading dock for the bigger, more expensive shows, then plausibility increases. 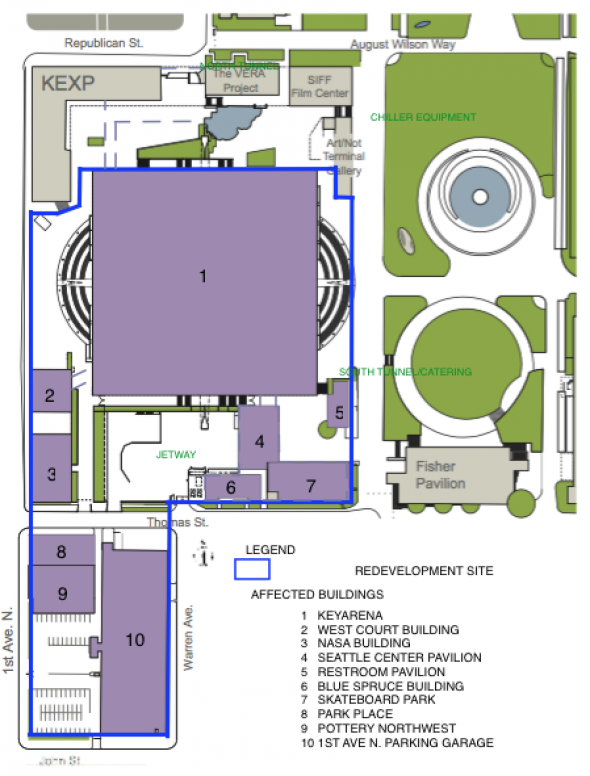 That suggests that a tear-down has the better chance to max out the available space. But that gets to an immediate order of business: Determining whether the building roof deserves landmark status.

Jill Crary, redevelopment director at the Seattle Center who conducted much of the tour, said city law mandates any building more than 50 years old is subject to a landmarks-commission review before a building permit is granted. Rather that wait for a citizen to make such a request down the road, the city is pursuing a landmark assessment prior to the city’s acceptance of a proposal.

“We need to get that started while the RFP is underway,” she said. “We’re just following normal development rules.”

Good to know there is something normal about this project. Going in six months from zero to three bidders providing plans for a privately funded arena is abnormal enough to turn a mayor’s head.

But before said head swells, let’s see what happens in the attempt to get a five-pound arena into a slimmed-down, two-pound neighborhood.