The arena battle in Seattle has added drama with the arrival of two reputable national firms bidding to try to renovate KeyArena, the Sonics’ former home. But Chris Hansen has been there and done that exam. It was so long ago, 2011, people may have forgotten what he learned, and why he spent more than $125 million in Sodo real estate to put his arena there.

In a one-on-one interview with me last week at a Pioneer Square coffee shop, Hansen spent an hour answering questions about the competing projects, including his willingness to bring a team to the city-owned Key operated by a third party — if it makes business sense.

“My job is to bring a basketball team back here,” said Hansen, a Roosevelt High grad who has come to great wealth by managing hedge funds. “If it ends up working at Key, I’ll be happy to work with them. if they can build a world-class arena in the next two or three years, I’m 100 percent for it.

“My worry, like with most sports fans, is they see how long it has taken our process. The Key would be another five- to seven-year process to get shovel-ready. If opportunities come up in the interim (for expansion or relocation), what’s gonna happen?”

Rather than both projects being considered separately, Hansen said his new proposal, which includes a change to 100 percent private funding, can be green-lighted at any time with a street vacation of Occidental Avenue, even as the mayor’s office makes a decision on whether to build out or tear down the Key, or choose nothing, by a promised deadline of June 30.

“We’re not going to act on the street until we have a team,” Hansen said. “If a team is available, (a retrofitted) Key wasn’t going to be ready anyway, right? If the option is a teardown, there’s really no way the Key is ready. If a team is available in the next eight to 12 months or longer, we can welcome them to the Key (with some Hansen-funded upgrades), and have our arena built within two years.

“That’s a fundamentally different option for the city that increases the chances for success.”

The two Los Angeles-area bidders, Anschutz Entertainment Group and Oak View Group, each will offer a remodel plan, plus an option for a teardown, by mid-April. Company spokespersons for each have said plans dictate creation first of a concert/entertainment arena, and then fit an NBA or NHL team later.

Because AEG and OVG have financial interests in other teams and arenas, league bylaws prevent them from owning a Seattle team. That means a prospective team owner would enter a city-owned arena with a third-party operator servicing large construction debt, plus an events calendar filled with more lucrative concerts.

Hansen thinks that limits an owner’s ability to control revenue streams, which limits the interest in owning a team in such a set-up.

“If you were to survey owners in pro sports, most like to control their arena/stadium without a third-party operator,” he said. “Complications come up, like putting money into a practice facility, or certain amenities (for players and fans).

“A sports owner may take a very long-term view of what those things mean to his franchise, in terms of attracting talent and fans, and a third-party operator is often going to be looking at the bottom line.”

He said there’s a fundamental difference in priorities between his group and the Key bidders.

AEG and OVG “are primarily in the music business,” he said. “They’re interested in building out their music platform in a great music city like Seattle. It’s commendable. Seattle deserves a world-class music venue.

“Our goals are a little bit different. We’re interested in a world-class sports arena that can also be a world-class music arena.”

Apart from the business model, there’s the more familiar potential physical limitations on the Key, which was renovated in 1995 with $100 million in public money. By 2001, the  building was deemed financially obsolete for the ravenous NBA by Sonics owner Howard Schultz. He sold the team in 2006 to Oklahoma City robber barons, and you may have heard the rest.

Hansen said he did with the Key in 2011 what he does with his day job as an investor in companies  — due diligence that included interviews with current and former employees, former owners, architects and a lot of data analytics on parking and traffic ingress/egress.

“Three things we learned,” he said. “Traffic is a really big problem. Parking is even a bigger problem, which has only gotten worse since so much parking has been taken away (for residential/commercial development).

“And there is no streetcar/light rail that makes for easy connectivity to that area, and it doesn’t look like there are plans for awhile.”

Hansen knew that the Key’s iconic roof would be eligible for landmark status after its 50th anniversary in 2012. The city is now pursuing a resolution with the landmarks commission, which should make a ruling before June 30. Hansen said the roof met all the criteria, and thus would have to be preserved in any remodel.

“If you keep the roofline, you can’t demolish,” Hansen said. “You have to retrofit. That limits the amount of square footage you can access. The site footprint is really small — 300,000 square feet. The next smallest NBA arena is 600,000 square feet. And it’s not just small seating capacity. The amenities that an NBA/NHL team requires  — suites, restaurants, bars, social spaces — is very limited.

“If you could demolish, that opens up to opportunity to perhaps put a 500,000-square-foot arena in there. But that arena would still lack things like a practice facility, adequate parking, adequate loading, adequate space for amenities that are increasingly important for live sports.”

Since the ice sheet for hockey can take away 25 percent or more of the capacity for a basketball set-up, some architects believe that offsetting the hockey arena configuration can produce a capacity of 15,000 for hockey. Hansen is skeptical, based in part on the troubles the New York Islanders are having in Brooklyn’s Barclays Center, which has an offset configuration.

The Islanders moved from the aging Nassau Coliseum on Long Island two years ago to Barclays, which seats 15,800 for hockey, but some sight lines are poor. The Islanders are averaging less than 13,000 fans a game, and are reportedly looking for a new home.

“The NHL is likely not to be supportive of a permanent solution with an offset ice rink,” Hansen said. “You can see it didn’t work out in Brooklyn.”

Perhaps the biggest impediment to the Key being home to a minimum of 82 winter-sports regular season games and sometimes more than 100 with playoffs, is the impact on the lower Queen Anne and South Lake Union neighborhoods, both of which have undergone extensive development since the Sonics’ departure in 2008.

“When we compared Key to Sodo based on facts, and not anyone’s interpretation of facts, it seemed clear to us there was a lot more disruption to the community than we would incur at Sodo during construction,” Hansen said. “Then when we start bringing in 200 event nights with people leaving at 10 p.m. or later, we felt like that would cause a lot of friction.

“In Sodo, there’s already two other stadiums here that handle much higher volumes of people than 18,000 at an arena. There’s no residential, and many businesses are closed by the time an event starts at 7 p.m.”

Apprehension about a big expansion of events at the Key was reflected in a recent survey of neighborhood residents. The Uptown Alliance, a community group, received 800 responses from residents, workers, business owners and visitors to a written survey of several questions about the future of the Key.

More than 53 percent of the respondents agreed or strongly agreed that their preference was to see the Key as a performance venue with the NBA/NHL sited elsewhere in the region. 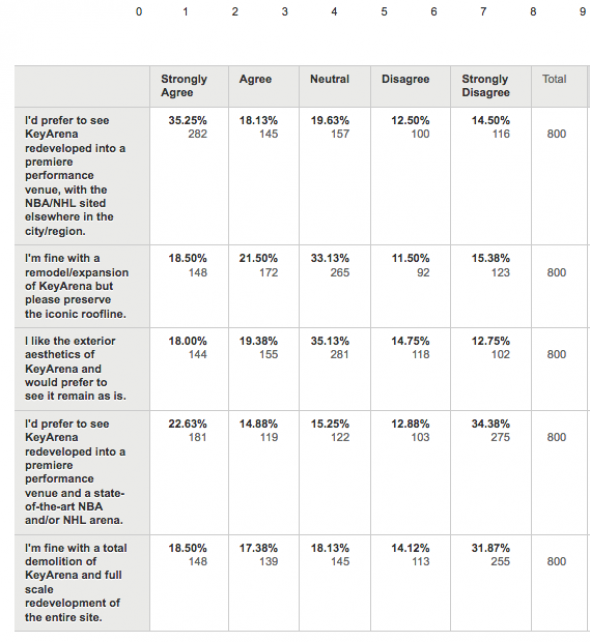 It should be noted that once the new Highway 99 tunnel is operational, three additional east-west streets will pass over the roadbed instead of only Denny Way, which should relieve some congestion around Seattle Center.

Hansen also brought up the point that a successful bidder for a Key retrofit also picks up the city as a partner, as well the Seattle Center’s many constituencies that use the grounds.

“We thought renovating the Key would take a really, really long time,” Hansen said. “It’s civic land that would have to be developed in conjunction with the city, rather than a private development. The city will be your partner in everything you do with construction.

“That will just increase time and expense. It has nothing to do with sports; it’s true with any project.”

Part Two Tuesday: Why Hansen believes he’s not blacklisted by the NBA; why he wishes the Port of Seattle would stick to the facts, and why he thinks an all-private arena can work economically.