Followers of the Seattle arena saga, be warned: Now that full plans of Oak View Group and Seattle Partners (Anschutz Entertainment Group) are downloadable for public perusal here, dark ski goggles are required because the level of dazzle may cause blindness.

The competitors to remodel the fusty matriarch of lower Queen Anne, KeyArena, revealed epic visions rich with imagery of a grand palace for music, sports and general gee-whiz wonderfulness about Seattle.

Each proposal is a commercial filled with endorsements for the builders, particularly Seattle Partners. More than 100 companies, agencies, politicians and users sent letters addressed to Mayor Ed Murray singing SP’s virtues, including three NBA and two NHL teams. Also in the mix was Motley Zoo, an animal rescue outfit that provides pets to stars before they go on a stage built or managed by AEG.

And here I was worried that all that concert money couldn’t buy rock stars love.

The irony behind all the SP endorsements is that many of the projects and events described occurred under the reign of Tim Leiweke, who from 1996 to 2013 was CEO of the entertainment colossus. But a falling out between Leiweke and his boss, Denver billionaire Philip Anschutz, caused Leiweke to strike out on his own and create Oak View Group.

While OVG is new and smaller, it appears to have one advantage: Cash and a line of credit.

OVG says its $564 million project will have $414 million in cash from its primary owners, entertainment mogul Irving Azoff and James Dolan of Madison Square Garden Co., owner of the NBA Knicks and NHL Rangers. Another $150 million will be a loan from Goldman Sachs investment bank, and some of the rest comes from equity partner Live Nation, a global entertainment company. OVG would pay the city $1 million in rent.

The SP bid of $521 million will be funded by $271 million in private cash from AEG and partner Hudson Pacific Properties, a Los Angeles real estate firm with Seattle holdings led by Victor Coleman, who previously had interest in partnering with Hansen in Sodo. The $250 million remainder is sought from the city via municipal bonds, similar to the $200 million in bonds Chris Hansen sought, then withdrew, for his arena project in Sodo.

In its request for proposals, the city said city financial participation was to be “minimal.” The bond request is not minimal. Even though it is not a new tax, nor a re-direction of an old tax, it is a commitment of the city’s bonding capacity that could be used for other projects, thus a city asset.

Among the many similarities and differences between the bids, the request for city help stands out.

Here is the Seattle Partners proposal for public funding from its document: 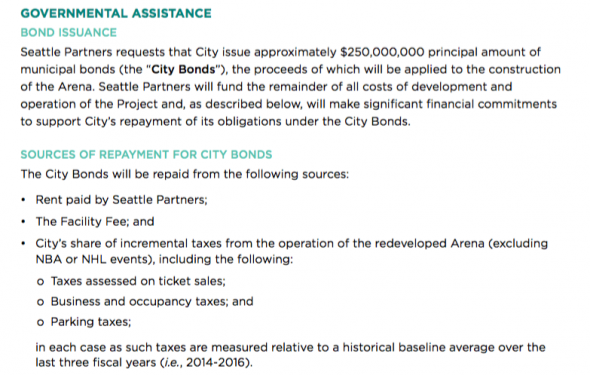 Elsewhere in the bid, SP says it will pay $5 million annually in rent to the city, and an additional anticipated operations surplus of $144 million over the 35-year length of the proposed lease, about $3 million annually. SP also says the savings in financial costs by using the municipal bond’s interest rate, considerably lower than the commercial rate, would save the project $47.8 million.

What that means is that SP is asking the city to help in saving $47.8 million up front, in exchange for $7 million more annually in rent and surplus revenues over what OVG proposes over the 35-year life of the lease. I’ll let the finance majors project out the value proposition, although I am curious what a dollar would buy in 2056.

The request for public bonds isn’t necessarily a deal-breaker yet from the city’s point of view, according to Brian Surratt, who heads the city’s interest in the project.

But it doesn’t fit the proposal’s specs, even if it does not increase the city’s risk. Certainly, the large and vocal anti-stadium-subsidy crowd in Seattle politics will clear its collective throat on the matter.

Some may view the bond request as a non-starter, although that wasn’t mentioned by Murray last week when he issued a statement after reviewing the bids with the principals.

“Seattle is in a unique position where multiple developers want to spend hundreds of millions of dollars on a world-class arena in our city,” he wrote. “Last week, I had an initial review of the proposals to redevelop the Seattle Center Arena. I am enthusiastic about both proposals.

“I look forward to digging into the details with my staff, the Arena Community Advisory Panel, and ultimately negotiating the best deal to bring the NBA and the NHL to Seattle.”

Happy diggings, Mayor Ed. Just don’t get lost in the dazzle and forget to ask a big question of Seattle Partners: Why did you do it this way?

If you don’t ask it, many of your potential voters will.