Given the caliber of the opponent, the Washington Huskies are unlikely to feel any consequences in their season opener Friday night (5 p.m., FoxSports1) in the New York area against Rutgers. But star LB Azeem Victor was suspended for the game, and DB Austin Joyner for the first two games, for unspecified violations of team rules.

Coach Chris Petersen disclosed the news Monday at his season-opening presser. While declining to offer details, he said of Victor, a first-team All-Pac-12 Conference selection a year ago and a fifth-year senior, “Guys make mistakes, nobody’s perfect. It’s a mistake.

“The hard thing is, you’re in a public eye and it’s tough. Azeem’s a good guy (but) guys make mistakes and we have team standards and we live by them.”

The Seattle Times reported Monday that anonymous sources around the program said that both players failed drug tests.

For the first nine games of 2016, Victor (6-foot-4, 232 pounds) was a leader of one of the nation’s best defenses before breaking his right leg against USC. He was a consensus preseason All-America selection for this fall.

Petersen did not specify who would step in for Victor. His four-game replacement a year ago, sophomore D.J. Beavers, had a foot injury during camp and is expected to miss a month. In the first-week depth chart released Monday afternoon, junior Ben Burr-Kervin is listed as Victor’s backup.

Sophomore Joyner (5-10, 182), the state high school player of the year at Marysville-Pilchuck, played in 12 of 14 games a year ago and was a candidate to start in the Huskies’ nickel scheme, as well as returning kickoffs.

Petersen also said fifth-year senior reserve TE David Ajamu was lost for the season after breaking a leg in practice. The 6-5, 245-pounder from Shelton High School played in every game last season and started twice in 2015.

For Ajamu, it was a second dose of bad news in the month. On Aug. 5, his apartment building in Seattle’s Northgate neighborhood caught fire and he lost most of his belongings. He was not home at the time. The fire started with an electrical short in a kitchen in another unit, displacing 60 to 70 residents.

“I feel bad for Dave,” Petersen said. “This team has a lot of respect for him. He’s been through some hard things in his life and he’s had a hard week. His apartment burned down (and) two days later, he’s done playing football.

“But he’s had great spirit. We love that guy. He’s an inspiration to us. He’s got a great degree from the University of Washington and he’s going to be a successful guy, I know that.”

Petersen said the athletic department, within the limits of NCAA compliance, “is giving him as much money as we can. There’s some stuff that we can do as coaches, and everything we’re clearing through compliance.”

Washington beat Rutgers 48-13 a year ago in the opener at Husky Stadium, in which Victor had 11 tackles. The Scarlet Knights finished 2-10 in the Big Ten Conference and are 30.5-point underdogs to Washington, ranked eighth in the preseason Associated Press poll. 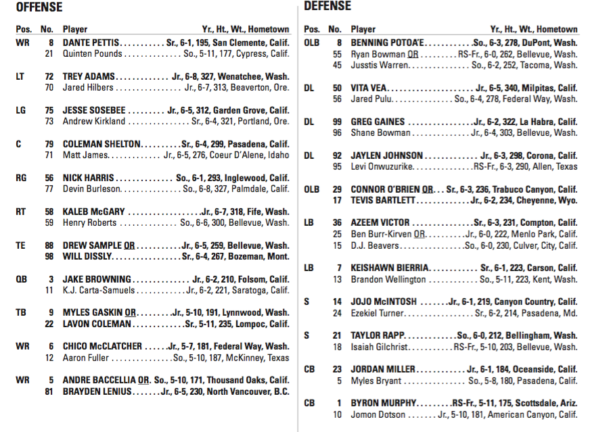