Thiel: Stick to sports? Trump sticks it to sports

The same week it became public that Seahawks DE Michael Bennett co-authored a well-reasoned, respectful letter to the NFL seeking a partnership for an awareness month on social justice, President Trump publicly called him a son of bitch for his anthem protest.

Congratulations to Bennett and his NFL colleagues. It worked. Awareness is suddenly global. Just not in the civil fashion intended.

Of his own reckless volition, Trump Friday finally crisped Twitter’s #sticktosports hashtag by wading into a pool of oil with his oral flamethrower.

He profanely castigated peaceful political dissent by NFL players, suggested owners were negligent, told fans to throw away their ticket money by walking out, encouraged more head-knocking violence despite all sports and the military having accepted the medical science explaining traumatic brain injury, and through his own insatiable vanity, mis-characterized the drop in NFL TV ratings.

On Saturday morning, Trump followed by “dis-inviting” Steph Curry to the modern White House custom of honoring sports champions. The Golden State Warriors quickly responded by declining to attend, and will head to Washington, D.C., for a potential alternative celebration.

For a leader focused on failing on North Korea, failing on health care, failing on climate change, failing on Iran and failing to stop Russia’s war on the American political system, it is remarkable that he had time to fail the one prominent U.S. industry that is reliant on inclusiveness and diversity for its success — major spectator pro sports.

He is nothing if not consistent. When he can assert that neo-Nazis in Charlottesville were “fine people,” yet Bennett and his fellow anthem protesters are SOBs, he remains true to his gaslighting tactics that backward is forward, in is out and night is day.

Trump’s unhinged rant during a political rally in Alabama that had nothing to do with sports provoked a predictable social-media firestorm that will probably have a physical embellishment Sunday when NFL players decide how to respond at stadiums across the country.

Seahawks RB Richard Sherman was quick with his feelings in a Saturday morning tweet:

The behavior of the President is unacceptable and needs to be addressed. If you do not Condemn this divisive Rhetoric you are Condoning it!!

Even Commissioner Roger Goodell, who has a seventh-degree black belt in tut-tutting, had to clear his throat, although using the word “unfortunate” was insipid:

“The NFL and our players are at our best when we help create a sense of unity in our country and our culture. There is no better example than the amazing response from our clubs and players to the terrible natural disasters we’ve experienced over the last month. Divisive comments like these demonstrate an unfortunate lack of respect for the NFL, our great game and all of our players, and a failure to understand the overwhelming force for good our clubs and players represent in our communities.”

Instead of hiding behind Goodell, hearing from these guys would be worthwhile. Obviously, they’re entitled to support any politician, but Trump’s pointless yet provocative interjection has roiled many in the owners’ labor force, potentially to distraction.

None of the owners are so foolish to attempt to halt free expression. But now the disruption has amped the intensity to the point where it can divide teams, fans in the stands and stimulate boycotts on both sides, Trump’s rant implicitly permits his supporters to become agitators, and forces coaches and front-office staffs to devote time to managing the fallout.

Certainly some fans will put teams and NFL sponsors on notice: Where do you stand on Trump’s sports condemnations? Imagine how the owners see their investment in Trump now.

Trump’s assault on dissent over racial inequality is particularly destructive in sports because so many athletes and coaches for decades have come from around the world to be a part of the American industry that eagerly offers opportunities for everyone in an athletic meritocracy. That doesn’t mean sports is free of discrimination, but the chance to succeed on one’s own abilities has been more of an established part of the culture than in almost any other high-profile industry.

The NFL workforce is 70 percent African American. The NBA is about 90 percent. MLB is dominated by players of Latino heritage. As white as the National Hockey League is, it needs green-card owners from Europe nearly as much as MLS needs them from around the world in the most popular sport of all.

South Korean golfers nearly own the LPGA tour. Boxing is dominated by Latinos and Eastern Europeans. PGA golf has more champions from more countries than any other sport.

Trump’s red-meat panderings to a political rally of his no-matter-what supporters did almost nothing to move the needle for him, but they inflamed many, fans s well as participants, who, with limited success, have been attempting to keep their eyes on the ball.

Said Trump to loud applause in Huntsville: “Wouldn’t you love to see one of these NFL owners, when somebody disrespects our flag, you’d say, ‘Get that son of a bitch off the field right now. Out! He’s fired.”

No, I wouldn’t love that. If African Americans don’t seek redress of grievances on a stage where they have great influence, where do they go? If Bennett doesn’t take action after he is pinned and handcuffed, for no good reason, to a Las Vegas sidewalk with a cop’s firearm pointed to his head, what does he do?

Fired? This isn’t a lame reality-TV show, but Trump keeps playing the presidency as one because he has zero awareness of, or concern over, anyone or anything that does not generate ardor for him.

A peaceful, silent anthem gesture has no measure of disrespect compared with Trump’s desecration of the presidency.

Transcript of Trump’s Friday remarks on the NFL 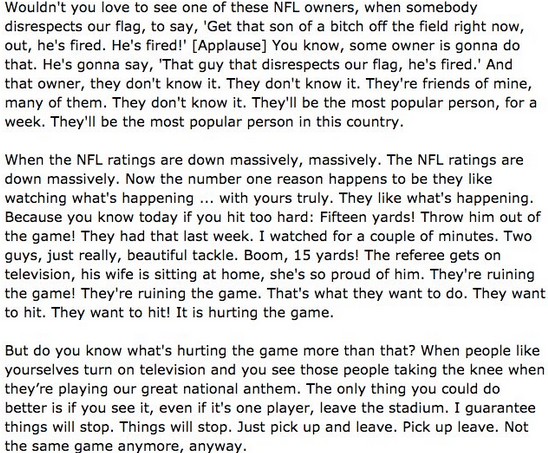