Perhaps the latest punishable version of wardrobe malfunction in the NFL came Friday when Seahawks CB Richard Sherman was fined $12,145 for an unsportsmanlike conduct penalty in Sunday’s game at Tennessee — removal of his helmet while on the field.

Sherman was flagged for three penalties on one play in the 33-27 loss to the Titans, including the helmet episode when he began a vehement argument with an official on a pass-interference call against him. On the play, teammate Kam Chancellor intercepted, but the penalties nullified the turnover and the Titans scored a field goal on the possession.

Sherman later said he removed his helmet because he thought he was headed to the sidelines after the turnover. The NFL wasn’t buying. Seahawks coach Pete Carroll said Monday there was no dispute that Sherman broke the rule. The fine amount is a standard one involving actions with game officials.

Sherman had a fourth penalty for a late hit on QB Marcus Mariota as he crossed the sideline. A subsequent confrontation between Sherman and Titans players produced penalties against Tennessee that negated a potential fineable offense for Sherman.

On the health front, Doug Baldwin “made it through practice today, did a nice job,” said coach Pete Carroll after practice Friday. But the Seahawks’ leading receiver was listed as questionable on the official injury list for the game against Indianapolis at 5:30 p.m. Sunday night at the Clink.

“Gotta make sure all the way through game-time that he is feeling good enough to carry out a full game-plan,” Carroll said. “We are prepared if he is not able. But he looked good today and he’s got a chance.”

After straining a groin muscle in the fourth quarter, Baldwin was held out of Seattle’s final possession, and missed two practices this week.

News was not as good for RB C.J. Prosise, who was listed as doubtful with a sprained ankle. If he can’t play, Carroll indicated that rookie J.D. McKissic will be activated to fill the third-down role.

“I think you’ll see McKissic will jump up as well as (RB Chris Carson),” he said. “All the guys will share the duties (but) JD has been a guy that has been groomed to be in that spot.”

CB Neiko Thorpe was also listed questionable. SS Earl Thomas, who sat out of practice with a sore knee, was good to go, as was special teams ace LB D.J. Alexander.

The Seahawks lost another special-teamer, LB Dewey McDonald, to an ACL torn against the Titans. The Seahawks replaced him with LB Justin March-Lillard, waived by the Dolphins, earlier in the week.

On the team’s website, players announced Friday the creation of a Seahawks Players Equality & Justice for All Action Fund to support education and leadership programs on social justice issues. Administered by the non-profit Seattle Foundation, the fund seeks public donations to help advance the cause of social justice that has been a flashpoint for protest around the NFL.

“First, we wanted to have an action item,” Seahawks WR Doug Baldwin said. “We’ve had a lot of requests from people outside of the building of, ‘How can I help, where can I donate, how can I do my part?’ So we wanted to give them a place to do that, but also players have an opportunity to do so as well.

“Secondly, we wanted to have a central, unified effort, really allowing the name to speak for itself. It started here with the Seattle Seahawks players, the organization itself, and all the funds go to important programs for equality and justice. I thought it was really comprehensive, and a very collaborative effort on the part of a lot of guys in the locker room.

“For the longest time now, we’ve been trying to figure out: What can we do as a team to impact change?”

Carroll Friday said he was pleased with a tangible step.

“Hopefully we’ll take this opportunity to really do the work to make a difference,” he said.  “We’re pretty happy about that and excited to get that started.

“I’m most proud of these guys. A lot of these guys have kind of grown up with us. We’ve been in a long time together, those that are in the leadership position. I’ve seen them come to a lot of stages of their young football lives, so it is very rewarding.”

Regarding the national anthem prior to Sunday’s game, Carroll said plans for a gesture have yet to be completed. 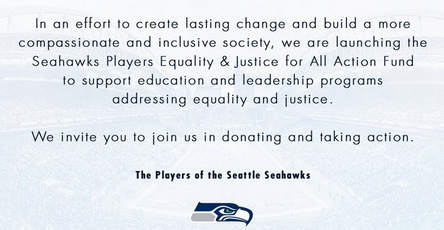