SS Kam Chancellor and LT Duane Brown look to be out, FS Earl Thomas and RB Eddie Lacy look to be back, and the running game looks to be  . . . Up? Down? Sideways?

If you’re brave enough to spread apart your fingers on the hand over your face, you’ll get a look-see starting at 5:30 p.m. Monday against the Atlanta Falcons. Pete Carroll made a promise to you, spoken with all the conviction that a double-negative phrase can provide.

Not going to not run it. Is that better than saying, “hopefully”?

The wavering of conviction was not confined to Carroll.

Answering a question about whether newly activated Mike Davis has a chance to be the lead running back in his Seahawks debut, assistant coach Tom Cable said, “We’re trying to find that, there’s no doubt . . . yeah, we’d love to have a lead running back. Sure.”

Nine games into the season, Seahawks coaches are talking in wishful terms normally heard during mini-camp in May.

Tied for 22nd in the NFL with 3.8 yards per carry, next-to-last with two rushing touchdowns (none from the red zone), the Seahawks are nearly upside down from their usual position.

It’s hardly a mystery — the Seahawks are on their fourth left tackle this season (say hello to Matt Tobin) and the backs are equally debilitated — but as with any good mystery novel, this one seems insoluble for most of the book.

Even for master sleuth Carroll.

“It is frustrating somewhat,” he said. “But I could stick my head in the sand and ignore some stuff too. We got to keep moving and we got to do what we can with our guys. It hasn’t been quite the same.

“We are still moving the football. We are making a lot of first downs, and we can do a lot of damage. I never give up on the fact of trying to balance out your attack.  I think it is the best way to play football. But it is a little bit different.  It hasn’t been as obvious as it has been in the past.”

The injury-induced churn of personnel always hurts worst along the O-line. In the ninth game of season last week, the Seahawks managed 80 yards on 23 attempts. And it looked a little bit like progress.

“We missed a lot,” Cable said. “We blocked some things good. We’re just not connected yet, and I’ve been saying that for a couple of weeks. We have work to do.”

Of Davis, who played two seasons in San Francisco after the 49ers drafted him in the fourth round out of South Carolina, Cable said, “You need someone who understands what they’re seeing, what they’re doing and is connected to the blocking. It all has to fit. Hopefully he can do some of that for us.”

If Brown’s sprained ankle prevents him from starting, Davis must connect behind Tobin, a fifth-year pro from Iowa who has never made a start at left tackle. His 21 starts have been at guard. And he’s up against Atlanta DE Adrian Clayborn, a former Hawkeyes teammate who became the talk of the NFL world this week after six sacks in the Falcons’ 27-7 win over Dallas.

Cable attempted to be brave, saying Tobin made only one major error after taking over for Brown against Arizona, but it allowed a sack of QB Russell Wilson.

“The rest of the game, he did a really good job, both in the running-game and in pass protection,” Cable said. “I think he’ll be fine. We are planning on him, preparing him like he is going to play, for sure. Like I said when we got him, he is really the perfect swing tackle for an NFL team.

“He’s been there before, so it’s not like a young guy is stepping in and you’re not sure.”

If he’s in there with Davis, it will be newbie behind newbie. Remember, Carroll promised that the Seahawks are “not going to not run it.” He just didn’t say which direction.

Sounds as if CB Richard Sherman made it through his Achilles tendon repair surgery better than Carroll did explaining it. After saying he talked with Sherman on the phone and described him as groggy, Carroll was asked what Sherman sounds like groggy.

“It went great,” Carroll said. “They were really happy with the way they went about it.  It is going to give him a chance to get back in months, which is really nice.  There is a couple of choices that they can make. They made a choice that was aggressive. I think it worked out well for him, according to the doctors.”

Sherman apparently is eager to get back on the sidelines.

“He has already been very clear,” he said. “He has been adamant about wanting to get back as soon as he can.  I would expect he’ll be back (Friday).  He wants to get around and be close to the guys that he has been working with and make sure that he is available for the guys he has been helping. You saw him on the sidelines (after his injury). He didn’t waste a minute.”

Elsewhere, the most concerning injury problem is the neck stinger to Chancellor, who is still being tested. Carroll said he can’t say yet whether the problem is short term or longer term, or whether he’ll play Monday. 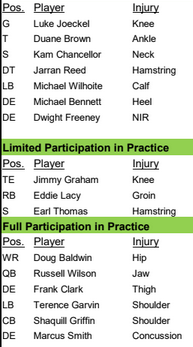