Update: Sherman thanks all for ‘taking a chance’

Following two days of speculation and rumors, the Seahawks did the expected Friday, officially releasing All-Pro CB Richard Sherman, likely ending Sherman’s productive and controversial career in Seattle. Sherman told the NFL Network that the team informed him they want him back under a different financial arrangement, but Sherman has stated that he is ready to move on.

“They wanted the financial flexibility going into free agency but expressed that they wanted me to return and will be in contact,” Sherman, 29, told the network.

The Seahawks tried to trade Sherman without success due to surgeries on each leg. The first in November repaired a torn Achilles tendon, the second last week removed bone spurs. The Seahawks wanted salary cap relief by jettisoning the $11 million he would have been owed for 2018 had he remained on Seattle’s roster after the start of the NFL’s new business year Wednesday. 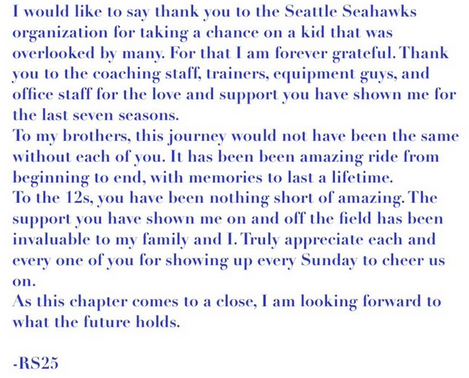 Sherman is working as his own agent, and is free to begin contacting other teams, none of whom yet have access to his medical condition and his rehab projection.

Seattle will begin the new year minus two regular Pro Bowlers, Sherman and DE Michael Bennett, traded to Philadelphia earlier this week largely for a small improvement in the draft’s lower rounds.

The Seahawks selected Sherman in the fifth round of the 2011 draft out of Stanford. He became a starter six games into his rookie year and was a fixture with what became the Legion of Boom, along with SS Kam Chancellor and FS Earl Thomas.

Sherman was hurt Nov. 9 in a game against the Arizona Cardinals.

Sherman played in 105 games, making 99 starts. He made the Pro Bowl four times, was an Associated Press first-team All-Pro three times, and made the NFL’s Top 100 list five times with a high rank of No. 7 in 2014.

He led the NFL with eight interceptions in 2013, when Seattle won the Super Bowl, and has 32 career interceptions, most in the league since he arrived in 2011. Sherman ranks fourth in franchise history in interceptions behind Dave Brown (50), Eugene Robinson (42) and John Harris (41).

Sherman also scored three touchdowns, two on interception returns and a third on a 90-yard blocked punt return in 2012.

Friday afternoon, Sherman went on KIRO 97.3 FM and said he wanted to a top team.

“I want to go to a contender,” he said. “I play at (a) high level. I’ve always been a guy that can work well with others and continue to elevate if my teammates elevate and elevate others. In Seattle, we had a lot of guys playing at a high level . . . We had to fit in like puzzle pieces and play off each other. We all did that very well, and that’s why we had the success we had.

“Would I go to a young secondary that is like we were when we were younger, and help them grow and help them advance? Sure, if the number looks right and the situation is comfortable for me and my family.”

Sherman said the door was open for him to return to Seattle.

“We’ve had conversations, and they’ve told me they’re going to allow me to go into free agency. But they want me to understand that the door is open for me to return,” he said in the radio interview. “They’re just trying to do what they need to do to clear up space and give me and them the best chance at free agency, and I’ve got to appreciate and respect that.”

His departure saves the Seahawks $4.75 million against the cap. Lane had two years left on his contract. He first lost the starting job to rookie Shaquill Griffin, and then after Lane’s return, lost the job to Byron Maxwell.

Lane was traded at mid-season last year to Houston as part of deal for LT Duane Brown but was returned to the Seahawks when he failed the Texans’ physical. Lane dislocated two fingers in practice five days before the Oct. 30 trade, and previously was inactive for games after a groin injury.

The Seahawks completed the trade by giving Houston a third-round draft choice in the April draft, after surrendering a second-rounder in September for DT Sheldon Richardson.

A sixth-round pick in 2012, Lane appeared in 70 games with the Seahawks, starting 21. Lane had 146 tackles, two interceptions and 15 passes defensed in six seasons while also being a big contributor on special teams.

One of Lane’s career highs and lows came on the same play in Super Bowl XLIX. Lane intercepted  New England’s Tom Brady in the end zone, but on the return he was tackled low near the sideline, causing him to tear his ACL and break his arm while falling to the ground.

Lane was part of one of the most successful draft classes in franchise history, a draft that featured Pro Bowlers Russell Wilson and Bobby Wagner.