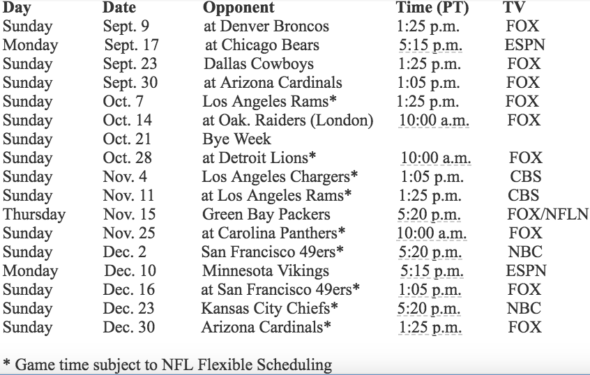 After all the high-profile personnel changes this off-season, the Seahawks figured to have taken a shot to the glams. But in the release of the 2018 NFL schedule Thursday, Seattle is  booked for the maximum five prime-time games, including four of the season’s final six. Apparently the TV networks want to see if the Seahawks most resemble “Lost,”  “The Apprentice” or “Game of Throwns.”

The biggest glamor game is Oct. 14 against the Oakland Raiders in London, the date previously announced in January. The Seahawks’ first regular-season overseas game is at the new stadium for the English Premier League’s Tottenham Hotspur at 10 a.m. PT, 6 p.m. in London. After the long flight back, the Seahawks will have their bye week.

The red-circle game for the 12s calendar is Dec. 2, when CB Richard Sherman returns, health permitting, to the Clink with his new teammates, the San Francisco 49ers. If only there was a way to get Jim Harbaugh fired at Michigan in time to rejoin the Niners as an assistant coach.

The Seahawks open with two road games at Denver and Chicago, the latter on Monday night. A second Monday night game is home Dec. 10 against the Vikings.  Two Sunday night games are the first Niners match and Dec. 23 against Kansas City, both at home. They host Green Bay on Thursday, Nov. 15.

The toughest stretch is six games between Nov. 11 and Dec. 16. It starts at the NFC West defending champion Rams in Los Angeles, back home in four days for the Packers, then 10 days later at Carolina for a dreaded 10 a.m. PT start. The annual pair of games against the 49ers is sandwiched around a home game with the Vikings.

As competitive things stand pre-draft, it’s conceivable the Seahawks could be underdogs in all six games.

A quick note on each game:

Seahawks at Broncos:  Anything less than a 43-8 triumph gets Denver GM John Elway fired.

Seahawks at Bears (Monday night): First national-TV exposure for the Barkevious Mingo era begins as the Bark in the Dark.

Cowboys at Seahawks: Will it be Earl Thomas defending the QB he’s practiced against for six seasons?

Seahawks at Arizona: No Bruce Arians. Pity. But no one watches, as Mariners clinch their first playoff berth in 17 seasons with a final-day, final-inning win over Texas.

Rams at Seahawks: Seeing Ndamukong Suh and Aaron Donald together in the same defensive line, Seahawks offensive players drop to their knees pre-anthem and never get up.

Seahawks vs. Raiders in London: British fans will think Raiders coach Jon Gruden is the second coming of Benny Hill.

Bye week: DT Dwight Freeney comes out of retirement to sign with the Seahawks, is cut the next day.

Chargers at Seahawks: The week’s run-up is filled with stories about Russell Wilson next year succeeding Philip Rivers in LA so Ciara has a shorter commute to her music studio.

Packers at Seahawks (Thursday night): Packers laughing so hard at Seahawks for 2017 signing of Eddie Lacy that Seahawks pull off another Fail Mary for the last laugh.

Seahawks at Carolina: Panthers QB Cam Newton is suspended by the NFL for the first known violation of post-game wardrobe rules. A nation exults.

Seahawks at 49ers: After 49ers victory, Sherman runs down Seahawks coach Pete Carroll on the sidelines: “What’s your deal?”

Seahawks at Cardinals: One-year anniversary of a loss to a team quarterbacked by Drew Stanton, helping spark the collapse of the Seahawks’ empire. The empire strikes back: Seahawks make wild-card at 10-6.