Thiel: Huskies save their worst hoops for last

For those who look upon on the NCAA men’s basketball industry as only slightly less corrupt than the Pentagon, more eyebrows broke the arch limit Friday. Louisiana State coach Will Wade was suspended after a report that he was recorded on an FBI wiretap talking to convicted fraudster Christian Dawkins about making payments to a recruit who became his starting point guard.

Just in case you’re a Huskies fan who watched your team Saturday night fall off the edge of the earth, we offer the big hoops picture for context.

If you have perspective, Saturday’s outcome doesn’t feel as bad.

Alas, college basketball fans in March have no perspective. They have madness.

Or in the Montlake case, sadness.

The Huskies saved the worst game of their otherwise remarkable season for last. Ahead of the Pac-12 Conference tourney in Las Vegas starting Wednesday, the league’s regular-season champion (24-7, 15-3) cracked, splintered, crinkled and turned to dust against Oregon’s pressure defense.

At home. In front of a sellout crowd.  On senior night.

For the first time this season, they lost at Hec Ed.

If the NCAA selection committee had to fill out its tourney bracket after the game, the 55-47 loss to the Ducks would have bounced the Huskies from the 68-team field. The NIT would have turned its back. The Cheez-It Bowl would have said hell no.

The defeat showed how vulnerable Washington is. The regular season’s final four games became a showcase for scouts watching UW. The vaunted 2-3 zone is not so much a problem if mid-range jumpers are taken and made, and the offense can be thwarted with pressure in the grill of point guard David Crisp.

“We were hoping the pressure wouldn’t bother us,” said coach Mike Hopkins, sounding a little desperate. “But they pressured. We got into our sets a little late. They were disruptive . . . they have a very good defense. We didn’t handle it.”

Matisse Thybulle, the likely Pac-12 player of the year, gave the Huskies their only lead when he opened the game with a three. He indicated they had no rally in them.

“We settled early,” he said. “They were giving us threes and we took them. When we missed, we didn’t get out of it and get to the hoop. Their defense made us passive.”

He even owned up a bit to the consequences of the pre-game festivities. The Huskies’ four seniors — Thybulle, Crisp, Noah Dickerson and Dominic Green — were deservedly saluted for perseverance that led to renaissance. Families joined them on the court, videos hailed their feats and giant replicas of their jerseys were awarded.

It’s hard to believe that two years ago, they were part of a Washington team that lost its final 13 games. A fifth guy on the team was Markelle Fultz, who three months later was the No. 1 pick in the NBA draft. They finished 9-22, 2-16 in conference, tying for the most defeats in school history, costing their beloved coach, Lorenzo Romar, his job.

How embarrassing was that?

But four days later, new hire Hopkins began his campaign to keep them at Washington. It worked. The payoff figured to be Saturday, when a quality win would help set them up for an NCAA tourney berth.

But it appeared, even with four seniors who’ve been through much, the moment was too much.

“When emotions play into it, it’s always hard,” Thubulle said. “It’s hard to say how distracting it was.”

Said Hopkins: “It’s hard to know. The energy was good.”

No, not really, not compared to Oregon (19-12, 10-8). The Ducks were playing only for seeding in the Pac-12 tourney, but they had heads and hearts into it. The Huskies did not.

Now it’s a team that finished 2-2, losing at league-worst Cal by three, winning at Stanford by one, winning at home by five in overtime Wednesday against Oregon State, then gas-piping against the Ducks.

“They had us on our heels,” Thybulle said. “It took us a little while to figure out what was gong to work for us. They continued to switch up on us and we couldn’t get comfortable.

“Give them a lot of credit for making it difficult for us. That affected our defense for awhile. Once we figured it out, it was too late.”

The Huskies barely have more practice time to figure it out. As the No. 1 seed in the tourney, the Huskies fly Tuesday and get to skip the opening session Wednesday. They play at noon Thursday against the winner of the 8-9 matchup between USC and Arizona, both of whom they beat during the season.

Wins Thursday, Friday and Saturday assure them of the conference’s automatic berth in the NCAA field. Any loss will invite selectors musing on at-large entries to examine what happened to Washington Saturday at home on senior night.

In their four years, these seniors have overcome much. It only seems to get harder. 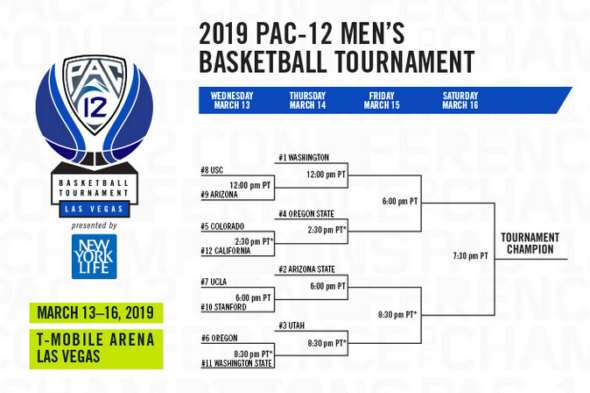