Given the facts that the Washington Huskies went 7-5 and are playing Saturday with a two-headed coach in a minor bowl, there’s an argument that Wednesday’s letter-of-intent day might have been their best day of 2019.

As opaque and mysterious is each class at every school, none of UW’s 23 verbal commits bailed after the news that Chris Petersen was stepping down and Jimmy Lake was stepping up.

“We’re extremely excited about this class,” Lake said on a teleconference from Las Vegas, where the Huskies meet Boise State Saturday. “With all that’s going on with Chris and myself, to be able to hold on to these 23 excellent players – we’re all just thrilled as a staff.

“When we start diving into this class, we have eight different states that are represented. What I really like about this class is the average core GPA of these 23 signees is 3.06 . . .  We’re very happy about that.”

Making the retention more impressive was that Lake was thrown into his first head-coaching job at the same time as bowl prep began.

“That two-week period was obviously somewhat chaotic, but with the scheduling that our operations people did and our recruiting department did, they made it very, very smooth,” he said. “In between flights and on flights, a lot of preparation in watching Boise State’s offense and game planning, just like we normally would. Instead of sitting at my comfortable desk, I was in-flight with laptop on my lap, but still got the same work done. Definitely excited we kept all 23 of these guys today.”

The key player in the class is LB Sav’ell Smalls of Kennedy Catholic in Burien, the first in the Petersen era to be rated a five-star, should that mean anything to anyone besides recruiting services.

In May, he wrote off UW from his list of favored schools, reconsidered, then said in September he was a Husky.

“I don’t know how deep I want to go into that one,” Lake said, laughing, about Smalls’ reversal. “These young men get twisted sideways and have so many things going at them. They have people in their ears that maybe shouldn’t be in their ears. Thankfully, Sav’ell had the right people talking to him at the right time, especially down the stretch.

“Our strategy was, we knew Sav’ell — high academic, very, very smart, big-time football player. We know he’s going to be a great teammate in our locker room. We knew he fit us, so we were going to keep recruiting him, which we did, even after all that came out, because we really felt he fit this program.” 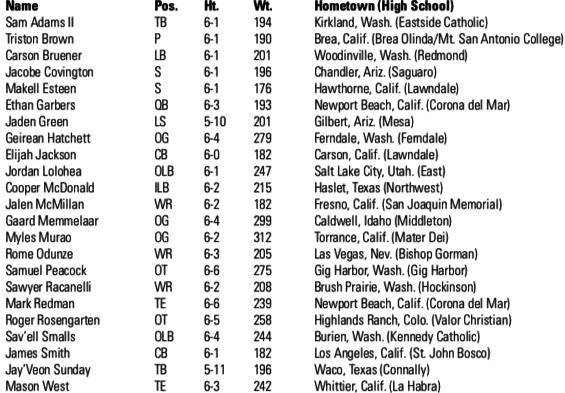