Thiel: UW haircut a tip of the college virus-berg

This month the NCAA is distributing about $225 million to member schools. Cool — until it is realized that the expected payout was $600 million. The difference is due largely to the cancellation of the men’s basketball tournament because of the coronavirus and all the clean protocol in the stadium, you can click here for read the new protocols.

Now you know why the University of Washington athletics department gave itself a 15 percent haircut Friday.

Cuts to the operating budget for the fiscal year beginning Wednesday will save about $13 million from a budget of $138 million, according to a release by the department. About $5 million will come from a minimum five percent pay cut to all 22 head coaches of varsity programs, as well as athletics director Jen Cohen. Assistant coaches will be cut three percent, along with two- to four-week furloughs for all professional, classified and union staff members, totaling 156 employees.

From powerhouse programs like UW down to the small Division III schools, the cuts are the tip of the virus-berg.

“Like most organizations this pandemic has taken a real financial toll on our athletic department,” Cohen said in the release. “We’ve done everything we could over the last few months to manage the cost-saving efforts as best as possible. As we look to the upcoming year we see challenges ahead, and we know that we need to implement additional mitigation strategies.

“And so these actions we’re taking in salary reductions and operating expense reductions, they’re painful, but they are absolutely necessary for us to have a collective path forward as an athletic department, not just for this year but for years to come.”

The release was quick to point out that none of the 22 programs were cut, avoiding for now what Division III Seattle Pacific University did earlier this month, per the Seattle Times, with its women’s gymnastics team — shut it down for good because of the financial impact of the virus.

Said Schulz on a Zoom conference to faculty and students around the state: “There is no doubt this has been the most difficult year in the life of Washington State University.”

During a Board of Regents meeting in May, Cohen said the impact from the pandemic on the athletics budget ranges from “kind of manageable to devastating.”

That range will become more precise in August, when the call will be made about whether all, some or no fans can attend the heralded football opener against Michigan Sept. 5.

If it can be played at all.

“I’m afraid and confident in my fear that we’ll see more sports be dropped, whether it’s programs or entire seasons canceled,” NCAA president Mark Emmert told the New York Times minutes before the Morehouse news. “And that’s really sad because we’re talking about opportunities that these student-athletes love to participate in, and it’s really, really important to their life and their growth and development.”

Driving Emmert’s fears is the cohort he’s attempting to serve — young people. The massive spikes in confirmed cases nationally over the past week, particularly in Florida, Texas, Arizona and California, are being blamed primarily on young people partying in bars, then infecting each other as well as older people more prone to covid-19.

In part because of the mixed messages between President Trump — who cares only about the economy and his re-election — and his own public health officials, the U.S. has seen more cases in the past week than in any week since the pandemic began. 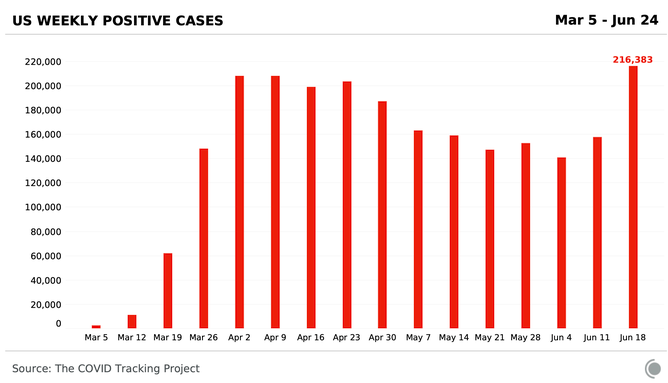 It’s true that at the moment, many individuals and businesses small and large are being crushed more drastically than big-time college sports. But their reliance on football TV income to support each school’s entire athletic program will have its reckoning in September, when desperation for revenue meets the need for player safety.

The only real hope for games is whether people across the nation can re-gain momentum lost from the early success at flattening the curve. As July arrives, signs point in the opposite direction. Reliance upon 21-year-old partyers for responsive leadership never has been anyone’s notion of a coherent plan.

In mid-April, Chun, the WSU ahletics director, was already in an eyes-closed cringe.

Then again, given the many corruptions of college athletics, the notion of collapse and re-birth may be the silver lining. The ability of the enterprise to resist reform is perhaps third only to the Republican and Democratic parties.

The Boston Globe recounted a story from a book by Robin Lester on the history of football at the University of Chicago. The Chicago superintendent of schools accused shameless college coaches at Chicago and Michigan of “practically stealing boys out of high school for athletic purposes” before they could even earn their diplomas.

When did he level his accusation? In 1903. Two years later, Harvard hired its first paid football coach, at almost twice the average salary of a full professor. It has been ever thus.

The out-sized impact of sports on colleges has been endlessly chronicled, lamented and ultimately shrugged off. The regrettable possibility of a pandemic-imposed puncture of the swollen blister may be the only way to heal.