Years from now, after the pandemic has faded, the economy has wobbled to its feet and college sports are reduced to “Olympic” activities subsidized by the rent paid by professional minor league football and basketball teams to use campus facilities and mascots, Aug. 11, 2020 will be viewed as a watershed day.

The decisions Tuesday to postpone the football seasons by the Pac-12 and Big Ten conferences will be known as the day the presidents, doctors and lawyers took back their schools from doofs like Dabo Swinney.

“My preference is let’s get to work and let’s go play,” the Clemson coach and Saban-slayer told local reporters in South Carolina in April. “That’s the best-case scenario, and I think that’s what’s going to happen. I don’t have any doubt . . . I mean, I have zero doubt that we’re going to be playing. The stands are going to be packed and the valley is going to be rocking. Zero doubt. That’s the only thought I have, right there.

“All that rest of the stuff, I don’t think about any of that.”

Fortunately, some educated people are paid to think of “all that rest of the stuff.”

Stuff such as the global spread of a virus that has to date flummoxed mankind and killed a portion of it, and the myriad unknown health and legal consequences of athlete participation to universities while the coronavirus rages largely unchecked in the world’s most backward rich country.

Nor is it possible to quarantine college athletes like the NBA, WNBA, NHL and MLS.

“We cannot bubble our student-athletes like pro sports can,” Scott told the Pac-12 Network. “They’re part of broader campus communities. Student-athletes are living with peer students on campus.”

The views of these people needed to prevail over coaches like Swinney because two months after he said that, a third of the Clemson roster tested positive for COVID-19.

I don’t expect Swinney or any of his peers to be experts in epidemiology. I do expect them to shut up and listen to people smarter than them. Isn’t that kind of the point of being at college?

After the Pac-12 Medical Advisory Board presented overthe weekend a 12-page document to commissioner Larry Scott, chancellors and presidents, they voted 12-0 to accept the recommendations to “stop contact and competitive activities.” The vote wasn’t that close.

The trigger was recent awareness of myocarditis in the hearts of several Big Ten athletes. It’s a rare condition created by viruses that directly invade the heart muscle, weakening and damaging its cells, through blood clots and inflammatory responses to viral infection. It can lead to arrhythmias and heart attacks.

From the document, here’s the assessment summary: 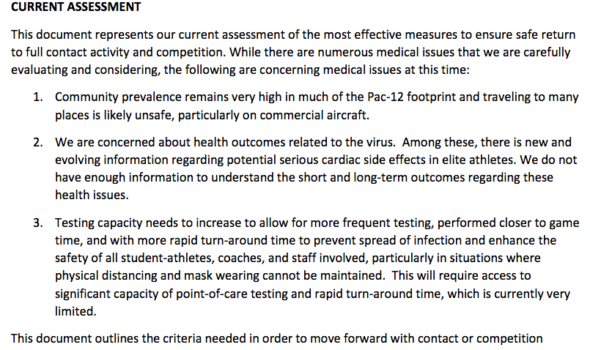 “This virus seems to have an affinity for causing damage to the heart,” Dr. Michael Martinez, medical director of sports cardiology at Atlantic Health System in New Jersey, told si.com. Martinez is the league cardiologist for Major League Soccer, the cardiac-specific consultant for the NBA and on the medical committee for the NFL.

Earlier, doctors associated the condition only with severe and, often, hospitalized COVID victims, usually elderly patients or those with underlying health problems. Lately, physicians are identifying the condition in young, healthy Americans.

The concern has “made the bar higher” for returning to fall sports, Dr. Jonathan Drezner, director of the University of Washington Medicine Center for Sports Cardiology, told ESPN.com, “and it could be we don’t get there.”

Football didn’t get there, despite badgering by the quack-in-chief, President Trump, who said in a tweet Monday that postponing college football would be a “tragic mistake.”

He then went on Fox Sports Radio to say,  “You know, people don’t realize, it’s a tiny percentage of people that get sick, and they’re old. It just attacks old people, especially old people with bad heart, diabetes, some kind of a physical problem, a weight problem.”

Hard to believe, but he’s wrong.

A study released his week from the American Academy of Pediatrics and the Children’s Hospital Association said more than 97,000 U.S. children were infected in the final two weeks in July.

The death rate is much lower for young people, but that doesn’t change the fact that a single athlete death from COVID-19 would be tragic for the family and a disaster for the university that put him in harm’s way when the contagion was a known threat. Yes, schools have liability insurance, but the last thing colleges need during a time of multi-level existential threats to their existences is high-profile lawsuits exposing their foolishness.

Even among survivors, the long-term consequences are only beginning to be understood.

So the lawyers, who are not mentioned in the document, nevertheless joined the doctors wagging fingers in front of the Pac-12 bosses, saying, nuh-uh.

From the document again: 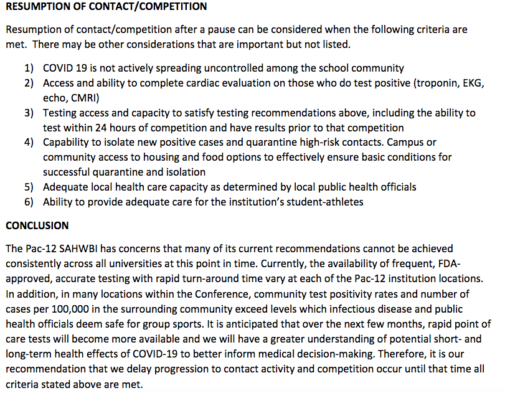 Even if the Pac-12 did the right thing, the decision disrupts the careers of all the fall sports athletes and blows major financial holes in 12 athletics departments.

There is talk of pursuing loans using as collateral the future TV revenues, but at the moment, it is hard to see what the future revenue picture will be, even if they manage a shortened spring season in 2021.

The other three conferences in the Power 5, the SEC, Big 12 and ACC, are talking of plowing ahead this fall, but the Pac-12/Big Ten decisions make those decisions, especially among players who don’t fancy themselves as lab rats, dubious at best.

No one planned for a lost season. Nor does anyone know whether pandemic conditions will be better in January, or a year from now, given the profound failures of the federal government to bring order from chaos.

What is known is that debts are on the books in the millions from the wave of new facilities built in the decade-long arms race that started with the creation of networks for each of the conferences. Washington State alone is servicing debt of more than $100 million.

“Schools have spent money recklessly for years,” attorney Tim Nevius, a former NCAA investigator who is now an advocate for athletes, told the Washington Post. “Now they’re in a position where if the season doesn’t go forward, they’re on the hook for millions . . . There has just been an extraordinary amount of spending on things that have very little resemblance to a university’s mission to educate and develop people.”

Shoving off from shore on Day 1 of the new college-sports world, the edge of the earth can be seen in the near distance, waves foaming, hissing and crashing.