Absent evidence of physical injury, it is implausible that Russell Wilson could descend from the best quarterback in the NFL to an average one over the span of four games. More plausible is that the Seahawks have deteriorated around him.

So in answer to the popular question, “Is Wilson pressing?”, the answer is yes. Clearly. What premier quarterback wouldn’t?

Every team-sport athlete who has reached a pinnacle thinks that he can do something more to fix a team slide. But because the term is seen as a pejorative and a weakness, neither Wilson nor coach Pete Carroll will use it.

Asked again the question at his Monday presser following the 23-16 loss to the Rams Sunday that was Wilson’s worst game of the season, Carroll said, “I think that we made some mistakes in this game that just don’t look normal for us. There’s the one play that jumps out (the second quarter end-zone interception), when you could have taken off and run. He saw something and took a shot at it. That’s an indication that he couldn’t take what was in front of him.

“Russ and I talked about how he can follow his instincts of the first opportunity, then take advantage and go to the next play. That’s an illustration of one play that was like that.”

But before Wilson’s game gets picked apart for his three turnovers, consider the Seahawks entering the weekend were leading the NFL in yards per play on early downs, as well as plays that resulted in a first down or a touchdown. And they still lead in points scored (32.3 ppg). Not a bad body of work. 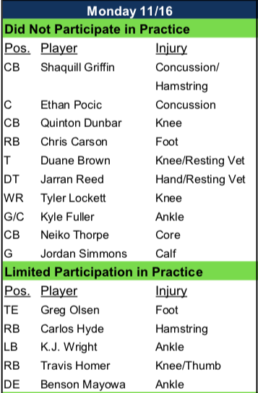 Then they entered the Rams game. Some notes:

•Kyle Fuller started his first career game at center in place of Ethan Pocic (concussion) and then sprained his ankle in the second quarter. He stayed in the game. Said Carroll: “He just toughed it out and did a really nice job of hanging in there.” But he made a bad shotgun snap that went down as a Wilson fumble.

Even though the Seahawks double-teamed All-Pro DT Aaron Donald into a small output, Wilson was sacked six times and hit 12 times. Against Buffalo a week earlier it was five and 11. His 30 sacks are tied for fourth-most in the league. He’s getting pounded.

Also, LG Mike Iupati returned after a four-game absence and briefly had to come out, replaced by third-stringer Jamarco Jones because usual backup Jordan Simmons was hurt.

•Because of injuries to Chris Carson and Carlos Hyde, the starting running back was Alex Collins, who hadn’t played in an NFL game since 2018. He was figuratively on the couch when GM John Schneider made his by-now-traditional emergency calls among former Seahawks running backs to see if they were free the next Sunday and had stayed out of the Krispy Kreme drive-thru (Eddie Lacy, you’re next!).

•Beyond go routes, second-year WR DK Metcalf hasn’t mastered making space for himself against superior corners such as LA’s Jalen Ramsey and Arizona’s Patrick Peterson. He had two catches Sunday on four targets for 28 yards. Three weeks earlier against Peterson, who’s in Seattle Thursday with the Cardinals, he had two on five for 23.

All of the foregoing are some of the things happening with the offense besides the highly visible misplays by Wilson. It’s true that every team has injuries and similar problems. It’s also true that every game has a winner and loser, and there are multiple reasons for each outcome that are not excuses.

The only portion of the offense that was near apex function was Wilson, but he can’t stay there without help. Specifically, a credible running game.

“I know all of the the publicity is going towards the throwing game,” Carroll said. “Russ has had a huge number starting this thing off, and we’re still probably close to the highest-scoring team in the NFL. We expect to get back to that, and we need all of our offense to get that done.

But it was hard to see Monday how that happens in the short-week cruelty of the Thursday night tradition. Pocic and Carsonwere among 10 players that didn’t practice Monday. Carroll was a little more optimistic that Hyde’s hamstring will allow him to play. But Carroll admits he regularly over-estimates such things.

Since Carroll has never claimed to be a hands-on healer, there’s not much he can do for team health. What he can do is have a little more faith in Wilson. Given his somber post-game tone, Wilson can use it.

But words are cheap. Actions count.

If you followed the game, you know that Carroll made the controversial decision to punt on fourth-down-and-inches from the Seattle 42-yard line. Carroll defended the call by saying it was too early in the game to go for it on fourth down, and that failure would be equivalent to a turnover in Seattle territory.

But even though Wilson Sunday dismissed any dismay by saying he was “good either way” with the decision, common sense says that wasn’t true.

The Seahawks this season are seven of nine in fourth-down conversions, a rate fifth-best in the league. On third down, they have converted 39 percent, which ranks 25th. Obviously, each circumstance is different, and in this case the attempt in one’s own territory is higher risk.

An even higher risk is a seeming loss of faith in Wilson. He’s one of the most mentally tough athletes in any sport. But so much has been made of his 10 turnovers over the past four games being the primary cause of the three losses. He had only 11 all of last season. He may not have experienced a period of such vulnerability in his otherwise hugely successful pro career.

The Seahawks have scored one offensive touchdown in the past two games against the Rams — the one TD in the 28-12 loss in December was an interception return — and the teams meet again Dec. 27. The stakes presumably will be higher, as likely will be the Rams, knowing they have won five of the past six in the series and solved for the Wilson puzzle.

Even before losing Sunday to the nemesis, Wilson was already pressing. Then his coach backed away from the offense in a key moment to trust a defense that hadn’t merited the faith.

“Russ is busting his ass for this football team and he’s doing everything he can and I would never, ever think twice about anything but that,” Carroll said on 710 ESPN radio Monday morning, responding to the question. “But that doesn’t mean that he can’t fall prey to that, too. He wants to win too. So we’ve just got to keep him within himself and he’ll come back and he’ll be great.”

The words are good. Enabling the action is far better.